The Superiority of Hemp

Latin for " useful hemp ", has been cultivated for over ten thousand years. The ancient Chinese called it "ma" and used it for making cordage, building materials, cloth and paper. Artifacts recovered from sites in China indicate hemp was cultivated since the remote beginnings of agriculture settlements and used for making textiles as well as for food and medicine and fibers for weapons. Chinese military were given the upper hand when they discovered that hemp fibers provided much stronger bowstrings than bamboo. As a result, hemp was the first agricultural war crop. Chinese royalty set aside large portions of land exclusively to cultivating hemp for this purpose. Called the "land of hemp and mulberry", China prized the mulberry because it was the food of the silkworm and hemp because it was what everyone used everyday. Food and oil from the seed, cordage from the fiber, stitching, textiles and clothing from the stalk, medicinal concoctions from the female flowers, and fertilizer when the leaves were returned to the earth to rebuild the soil.  Although the earliest traces of hemp fabric have disappeared, archeological research reveals that hemp cords were twisted together and imprinted on the sides of pottery dating back 12,000 years.

Hemp was introduced to the western hemisphere by the Spaniards in 1545, who cultivated it first in Chile. The benefits and commercial applications for its byproduct made it high in demand and lucrative as a crop. So much so that in 1619 an Act was passed in Virginia making it law that some plantations had to grow a percentage of "Indian and English" hemp. Between the American Revolution and World War II hemp was one of our country's most important agricultural crops. George Washington and Thomas Jefferson grew hemp on their plantations and both encouraged its widespread cultivation. Benjamin Franklin started one of America's first paper mills with hemp, which allowed the colonies to have a free colonial press without having to import paper from England. Thomas Jefferson drafted both the Declaration of Independence and the U.S. Constitution on hemp paper. The sails for the USS Constitution, and nearly every other old sailing ship, were made of durable hemp fabric. Because hemp fiber is ten times stronger than cotton, it was traditionally made into twine, canvas and clothing.

“Make the most of the Indian hemp seed, and sow it everywhere!”
― George Washington

High protein hemp seeds were used as food and in making hemp oil, which has been found to be richer in polyunsaturated fats than Canola or Soy. In India, hemp was believed to have been produced by the gods. The Bhagavad Gita called it "the healing herb", and throughout the subcontinent it was a valuable medicine used to treat malaria, improve digestion, cure dysentery, increase mental power and heighten sexual potency. The Bible referred to hemp several times in the Old Testament. In Ezekiel, hemp (Kaneh) is called a "plant of renown".

Hemp is a truly hearty plant with very few natural enemies. It can be grown easily without the use of Pesticides, Herbicides, and acts as natural weed suppressor due to the fast growth of the canopy, blocking out sunlight to other weeds that are trying to grow. Since it takes only 100 days to grow, several crops can be planted within the year or after other crops are harvested. It can be grown in any climate, in any agronomic system. It can also withstand some of the most brutal droughts.  The leftover stalks make excellent mulch. Due to it’s long roots, hemp replenishes soil with nutrients and nitrogen and helps control erosion of topsoil. Hemp can actually clean up toxins from the ground. This process is called phytoremediation. A good example of this is when hemp was used to help clean up the Chernobyl Nuclear Disaster site to remove radioactive elements from the ground.


Hemp is used to make over 25,000 consumer products. From hemp apparel and accessories to house wares and hemp seed oil cosmetics, hemp is an Eco-shopper's dream. Some of the products made are: clothing, shoes, diapers, rope, canvas, cellophane, paints, fuels, chain lubricants, biodegradable plastics, paper, fiberboard, cement blocks, food, cosmetics, and soap. Hemp is the longest and strongest natural fiber known to man. The first Levi's jeans were made of hemp fibers which are longer, stronger, more lustrous, absorbent and mildew resistant than cotton. Even if 1917 technology were used today to process hemp into pulp, hemp could replace about 70 percent of all wood pulp produced by paper mills.

Coal and petrochemicals originally received their energy from the sun millions of years ago and stored energy as the plants decayed. When burned, they release pollutants into the atmosphere. Biomass fuel on the other hand, releases fewer pollutants and the fuel source spends the growing season removing carbon dioxide from the atmosphere through photosynthesis. Hemp is the world's champion photosynthesizer, converting solar energy into biomass more efficiently than almost any other plant. Hemp has at least four times the biomass/cellulose potential of corn. It can also compete economically with petroleum-based fuels without depleting the ozone layer. During World War II Henry Ford  developed a car that was not only made of hemp fibers, but could run on hemp-based fuel. Rudolf Diesel, inventor of the Diesel Engine, invented the Motor in 1894 to run on hemp seed oil.  Hemp can produce between 20% - 40% more oxygen than will be polluted. It is widely known that hemp can be used in so many ways as an Eco-friendly alternative to our current methods. Hemp hurds (the woody core of the stalks, and the bulk of that stalk, can be used for paper, animal bedding, oil absorbent, soil amendment, chemicals) also serve as a renewable source of raw material for the production of plastics, and are much cleaner and more environmentally attractive than petroleum. Given that so many of today’s products are produced from toxic materials such as petroleum, by switching to hemp based products the benefits for the environment and ourselves would be enormous. 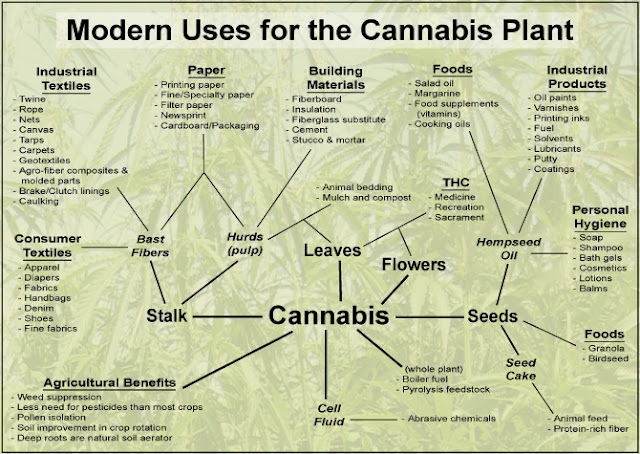 Hemp is highly valued for its high content of Polyunsaturated Fatty Acids (PUFA). The plant contains the highest concentration of PUFA in the entire plant kingdom, the majority of which are the two Essential Fatty Acids (EFA), Alpha-Linolenic Acid (Omega-3), Linoleic Acid (Omega-6) and Oleic Acid (Omega- 9) .  A perfect 3:1 ratio of Omega-6 and Omega-3.


Many people are oblivious to the great benefits of hemp. Some incorrectly assume that it is a drug because of its close association with Marijuana. The U.S. government has even made it illegal to grow hemp.  Although hemp and marijuana are both from the cannabis species, hemp contains virtually no THC at a level less than 1%. If you smoke hemp you will likely get a headache. You will not get high.


A great Q&A with one of my absolute favorite companies NUTIVA, sums it up quite well:

Q: "What is the difference between hemp and marijuana?"

Nutiva, as well as other companies, are part of the “Test Pledge”. It is a pledge stating their products will NOT have amounts of THC within them that would cause someone to fail a drug test. Beside the benefits of all 3 Omega Fatty Acids, Hemp contains the second highest amount of protein next to soy (not as easily digestible as Hemp). It contains all 20 amino acids, including the 9 essential amino acids (The building blocks of Protein) that our bodies cannot produce. Just 30 grams (3 tbs) of Hemp seed contains 11 grams of Protein. Hemp seed protein closely resembles that which is found in the human blood making it easier to digest than soy protein, whey, and other protein sources including meats. The plant also contains sufficient sources of Fiber, Magnesium, Iron, and Zinc.  The seeds can be eaten whole, pressed into edible oil , or ground into flour for baking.


In all, Hemp has a vast amount of potential uses and health benefits. As a food source, I use Hemp daily. I make some amazing, very easy and fun hemp milks. Sprinkling the seeds over some fresh salads adds a nice nutty flavor and extra essential nutrients. 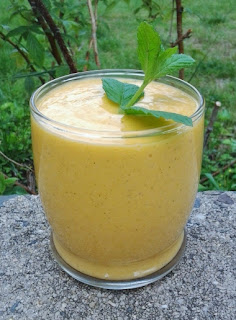 Combine all of the ingredients (Except the Mint) into your blender or Food Processor. Blend until smooth and pour into a glass.
Place chopped or whole Peppermint in drink for an extra party in your mouth.
Serves 1

Don't throw away those Mango peels just yet. Take the peels and place them into a medium pot and bring the water to a boil for just a few minutes and then let cool.
Remove the peels and you have a nice refreshing face wash.
(Always be sure to wash fruits and veggies thoroughly before use & BUY ORGANIC)


Posted by Joseph Rakowski at 3:05 PM